Alexandria, Virginia, recognized by Travel + Leisure among the Best Places to Travel in 2023 and with an evolving waterfront located just minutes from Washington, D.C., offers plenty of new and exciting things to do this year. A new luxury hotel in Old Town and an influx of date night restaurants across the city’s neighborhoods complement retail trends including wellness and sustainability. Immersive Black history experiences and public art beckon visitors to the waterfront and beyond. Keep reading to learn about a new brewery, a James Beard-nominated chef and more. In February 2023, the new southern waterfront route of the self-guided Alexandria African American Heritage Trail debuts with nearly double the number of stops as the northern route. The southern route, presented in the form of an online StoryMap, highlights the people, places and neighborhoods from the time of Alexandria’s founding through the 20th century and was developed as a volunteer community initiative with support from the Office of Historic Alexandria. Corresponding signage and markers will be installed along the route in summer 2023. In late March, Two Boxes of Oranges and Admonia Jackson will be unveiled as the fifth temporary public art installation on Old Town Alexandria’s waterfront, on display until November 2023 as part of the City of Alexandria’s Site See: New Views in Old Town series. Created by Jamaican-born, New York-based award-winning artist Nina Cooke John of Studio Cooke John, the installation is inspired by the ships uncovered on Alexandria’s waterfront in 2015 and 2018 and the many layers of history that are not readily seen. The installation forms an abstracted ship’s hull with steel vertical elements that rise and bend, referencing the curve of the hull’s frame. Visitors can stand within the space and imagine a time in Alexandria’s history when the ships carried not only cargo like tobacco, molasses, rum and limes, but also enslaved people who were traded as part of the transatlantic and domestic slave trades. The outer blue of the installation is contrasted with an orange inner surface depicting text pulled from ships’ manifests listing items like herring, coconuts and gin, alongside names and descriptions of enslaved people, such as “Jane Tailor, female, 5’ 2”.” Also listed are “two boxes of oranges” and “Admonia Jackson.” 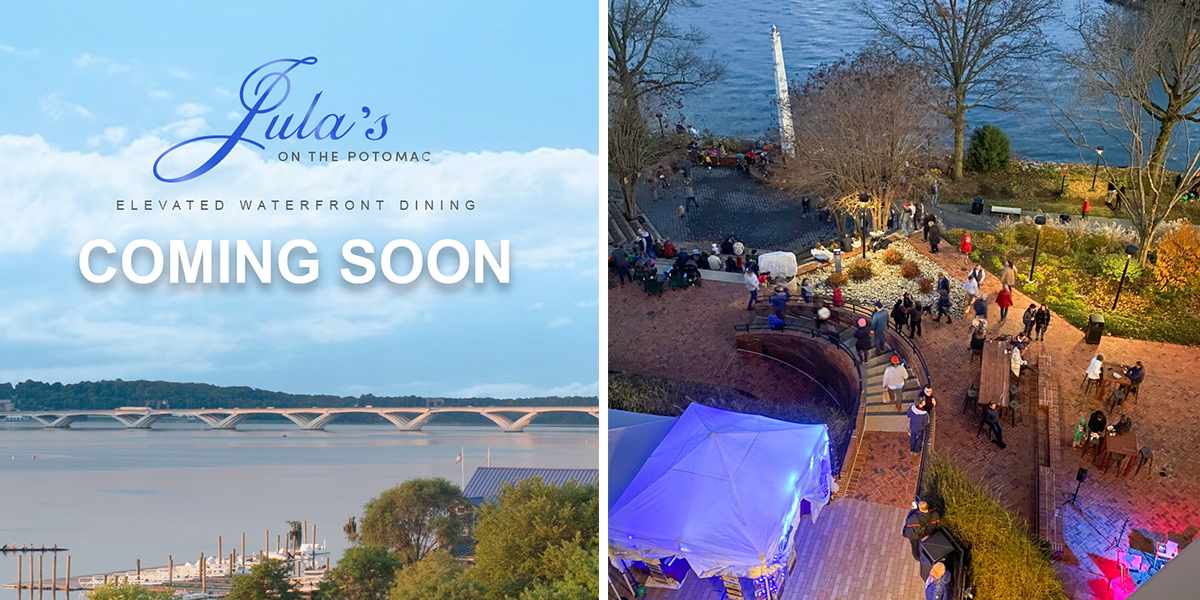 Even more magical riverside views are in the works as Old Town North waterfront eatery Café 44 undergoes a 7,500 square-foot expansion at Canal Center and rebranding as “Jula’s on the Potomac,” in honor of the owner’s great-grandmother and namesake. The upgrade includes a state-of-the-art commercial kitchen, customer-facing raw bar and charcuterie bar, central bar with a view of the Capitol and the Potomac, private dining room, social media nook and more. The current and expanded spaces are set to be completed by fall 2023. This restaurant expansion is complemented by the continuation of new events and programming launched at Canal Center in 2022. 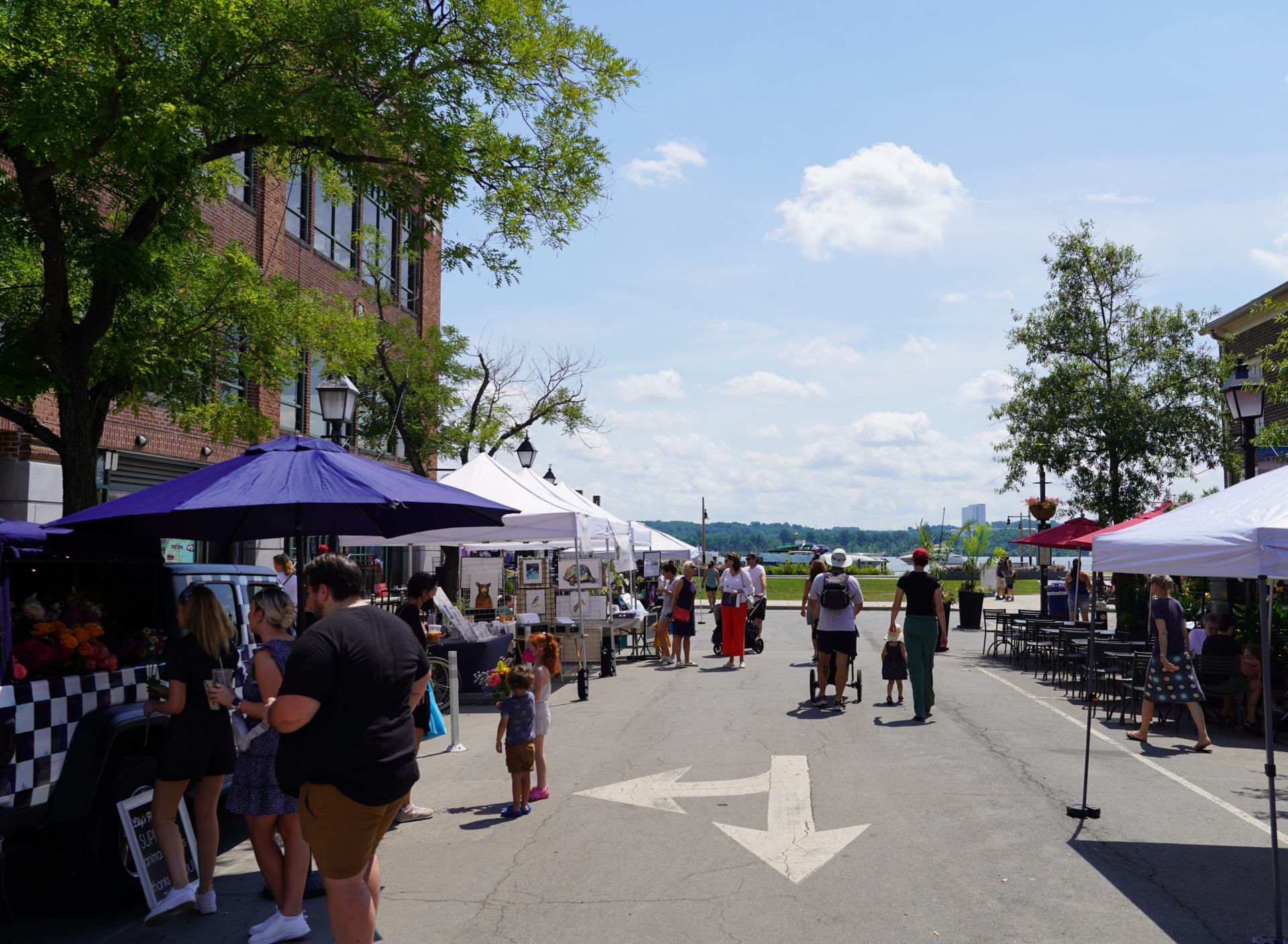 Just steps from these new experiences along Alexandria’s waterfront, locals and visitors alike can enjoy the expansion of the permanent pedestrian-only zone on King Street, with the 0 block joining the 100 block of King Street. Meanwhile, the City’s parklet program was recently made permanent, allowing for streeteries and outdoor retail areas to continue thriving into 2023 and beyond.

Visitors looking to explore the region will find Alexandria is the perfect home base for an afternoon visit into Washington, D.C., via water taxi, Metro or bike, including The Wharf’s Phase 2 along the District’s Southwest waterfront. The Alexandria Black History Museum will reopen in 2023 with a new exhibition, Preserving their Names: The Black Lives Remembered Collection, featuring digital images and artifacts donated from the community and DMV following the murder of George Floyd. The updated Before the Spirits are Swept Away exhibition, showcasing Sherry Zvares Sanabria’s paintings of African American sites, emphasizes the personhood of enslaved individuals, centering them in the sites where they lived and worked. The new children’s area offers thought-provoking and age-appropriate activities for young visitors. You can already plan a visit to Freedom House Museum, a National Historic Landmark which reopened in spring 2022 with three new exhibitions showcasing Alexandria’s Black history and the Black experience in America.

Visitors can extend their museum momentum into D.C., where they’ll find the newly reopened National Air and Space Museum, featuring eight new and renovated galleries, and brand-new museums opened in late 2022 including the captivating Museum of Illusions and a D.C. location of the Rubell Museum, hosting a Marvin Gaye-inspired art exhibition and more. 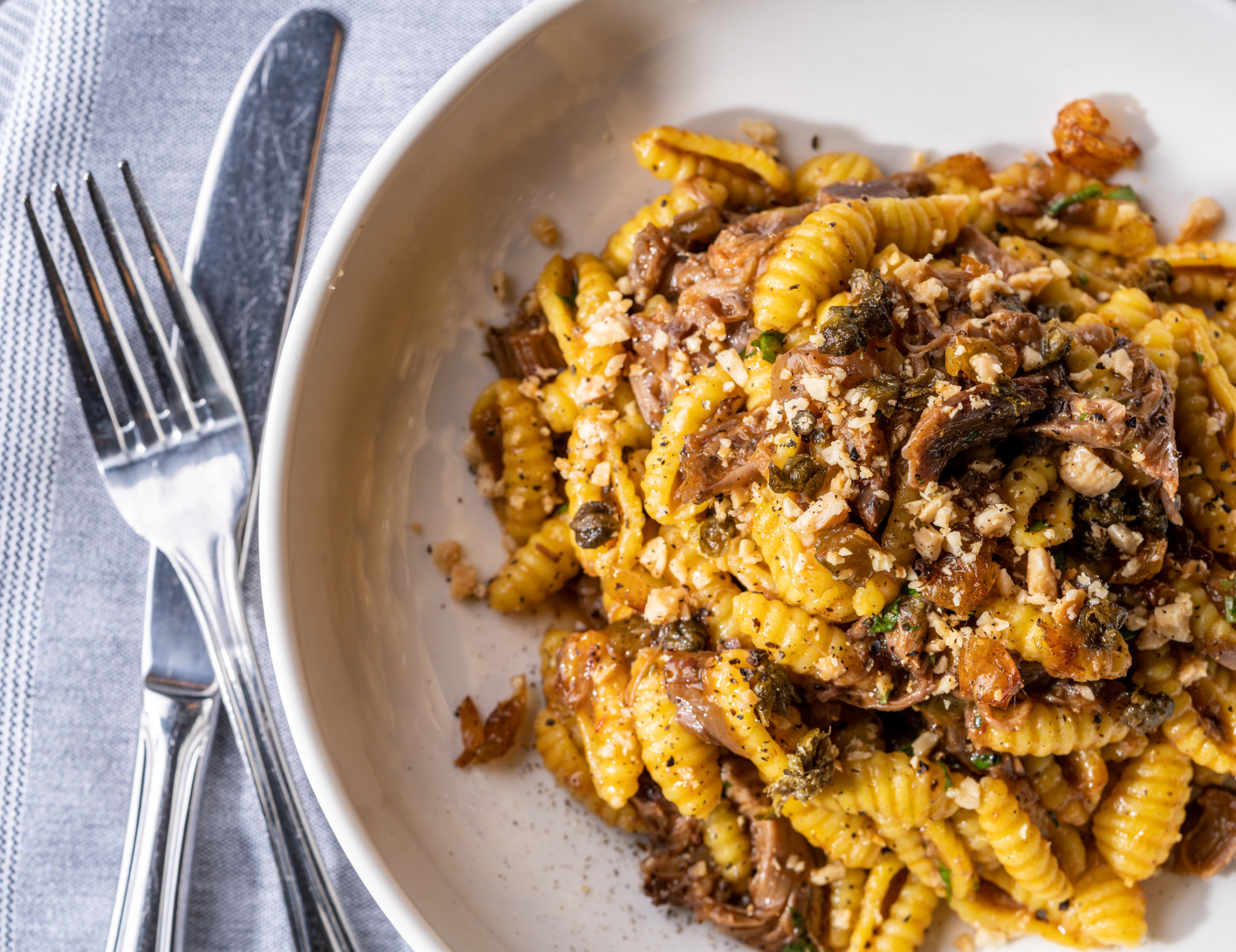 An influx of Italian eateries include the opening of Thompson Italian on King Street in January 2023. The second location of the acclaimed husband-and-wife-owned Falls Church venture features the olive oil cake that earned Pastry Chef and Co-owner Katherine Thompson a James Beard nomination, expanded pasta and seafood menus and an infusion of Middle Eastern flavors courtesy of Executive Chef Lucy Dakwar’s Palestinian roots. Find more Italian plates at Michael’s on King, a new Old Town venture since fall 2022 from the teams behind the former Magnolia’s on King and Michael’s Little Italy. Plus, grab a slice at new pizza spots such as Frank Pepe Pizzeria Napoletana in Alexandria’s West End, Handover by the Slice on King Street, and Andy’s Pizza in Old Town and coming soon to the new Atlas Brew Works location in Carlyle. Date night options have multiplied with tempting new openings such as 1799 Prime Steak & Seafood, a polished but inviting steakhouse in Old Town owned by Jahmond Quander, a member of one of the oldest documented African American families, and co-founded by Chef Sonny Tena. Also in Old Town, play sommelier with a wine list focused on female winemakers at Virginia’s Darling Wine Bar, a new “nightly dinner party” at Mae’s Market and Café, or head to Railbird Kitchen, a small plates, chicken sandwiches and cocktails concept designed to complement its sister establishment, Captain Gregory’s. In Alexandria’s West End, settle in over ceviche and Peruvian favorites at Lima Bistro Bar & Restaurant or bring your appetite for traditional Ethiopian fare and live music to Roha Ethiopian Restaurant. 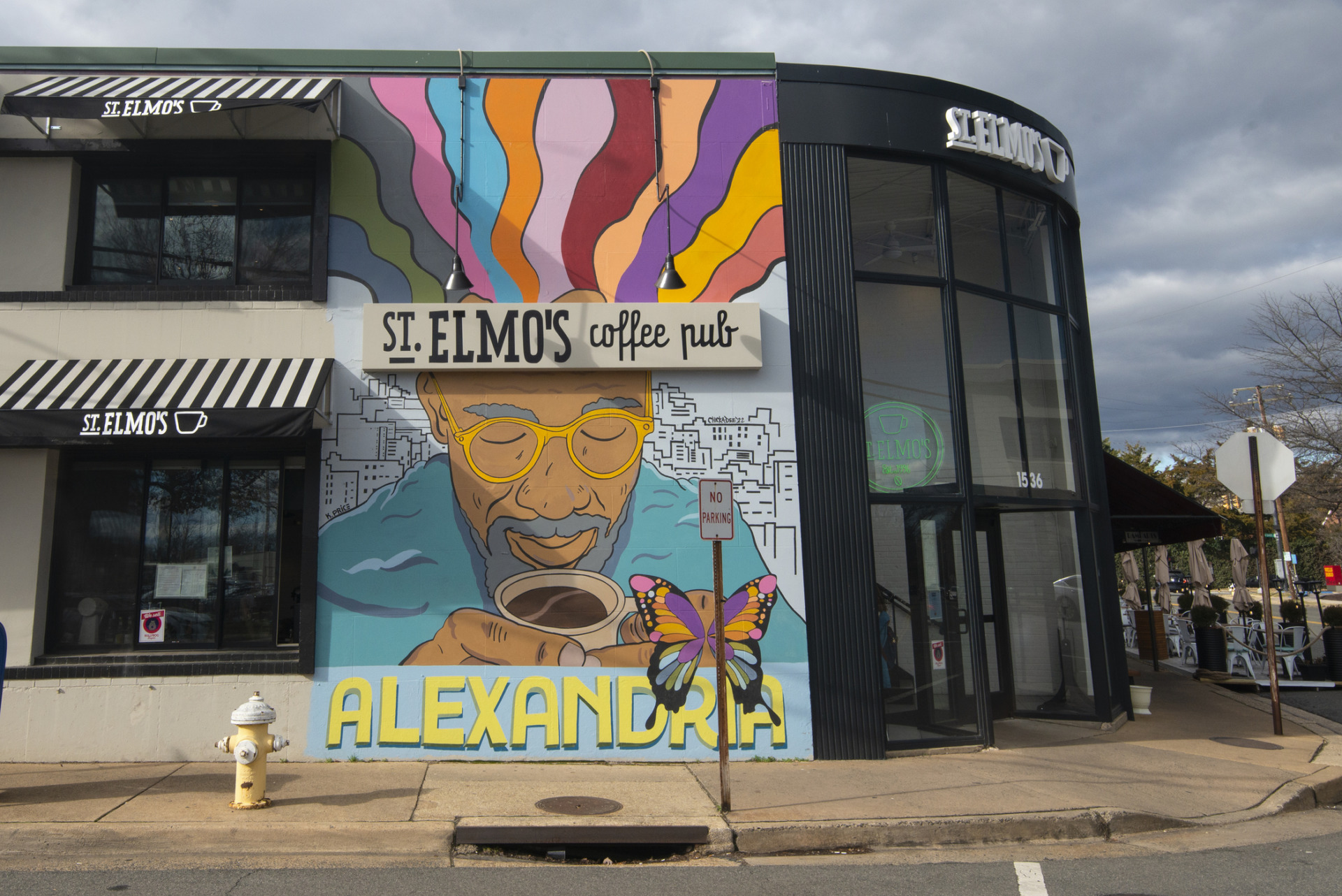 Alexandria’s wellness scene is expanding with recent openings such as Ms. Moxie’s Moon Shop, an Old Town boutique focused on female health and wellness whose founder, Ann Ile, worked as a nurse for several decades. Restore Hyper Wellness in Alexandria’s West End offers a menu of beneficial treatments to reduce inflammation, improve sleep and more. Work up a sweat with rentals from Unlimited Biking and Strictly E-Bikes’ new outposts or a class at PIES Fitness Yoga, which moved to Prince Street in 2022. Fill your home with mood-boosting greenery after a trip to PlantHouse in Old Town North and pick up Mexican skincare products (and something to eat) from Cocolita in Arlandria. Gift-buying just got even easier around town. Create a custom scent for a loved one at Lumière Candle Studio, which opened on King Street in spring 2022, or pick up locally crafted artwork from Made in ALX’s brick-and-mortar location in Old Town North, open since summer 2022. New to Old Town since spring 2022, Happy Place Gift Bar offers smile-inducing goodies and Your Hobby Place is a go-to destination for games, cards, collectibles and more. In spring 2023, Hotel AKA Alexandria brings a dramatic new addition to Old Town Alexandria, just steps from the city’s flourishing boutique scene and thriving waterfront, ushering in a new wave of luxury to the city. Hotel AKA Alexandria will be one of world-renowned architect Piero Lissoni’s first U.S. hotel projects. A floating staircase will be the dramatic lobby focal point, and design throughout the property will balance modern minimalism and refined mid-century elements with sleek lines and dark tones. The hotel’s 180 guest rooms and suites will offer residential-style comfort. The Zen Garden Suites give guests access to a tranquil garden, as well as spacious living area and sleeping area. The hotel’s terraces overlook the neighborhood and lush courtyard. Under Atelier AKA F+B, award-winning chef, and restauranteur Greg Vernick (named Best Chef: Mid-Atlantic by the James Beard Foundation), will oversee the concept and menus for the hotel’s a.lounge, a refined lounge with a menu of classic and signature cocktails, as well as renowned wines and light bites. Guests can also dine in sophisticated style at a.café with a contemporary menu of breakfast and lunch. Additional amenities at the hotel include a.cinema with a curated film program and a.terrace, an outdoor area where guests can enjoy a cocktail from the bar or relax to the calming water feature by the firepits.

New in 2022, Alexandria’s largest hotel property, the Hilton Alexandria Mark Center in the West End, completed a multimillion-dollar renovation including the debut of the new Sushi Bar and Marketplace, revitalized lobby and public spaces, guest rooms, and meeting and event spaces.

Metro’s highly anticipated Potomac Yard Station is slated to open in the first half of 2023 and will connect locals and visitors to the evolving Potomac Yard neighborhood in National Landing, a location set to become a key economic and educational draw in the coming years as the Virginia Tech Innovation Campus opens in fall 2024 and Amazon’s headquarters develops nearby in Arlington. Expected in May 2023, the Yellow Line will reopen following bridge and tunnel repairs that closed the line for nearly nine months. In November 2022, the 3-billion-dollar Silver Line extension to Dulles International Airport opened for service, linking the nation’s capital and Northern Virginia to Dulles corridor’s international center for travel.